Is it just me, or were have the 2018 Winter Games been amazing?  Here are the love warrior heart highlights:

The internet populi agree with me that he went under appreciated (He was robbed!) having left with a team bronze. But judging for figure skating changed recently and I was not in charge. The rules favor those who attempt the most technical leaps, with only a slight deduction if a guy should botch the landing (like the gold and silver medalists did). Adam Rippon’s skated clean, and apparently no bonus points are awarded to a skater who becomes a pure expression of radiant light. While Adam did not attempt any quadruple spins (not the technical term) he did land back-to-back triples. We all won that event just by watching him compete.

Confession: I am a sucker for figure skating. I mean, why does figure skating even exist? Ballet got too easy? Someone dared the dancers to take it to the rink? In pairs figure skating the gold medal went to Aliona Savchenko and Bruno Massot (Germany), who earned the highest score ever recorded in the pairs free skate in Olympic history. While we went to our jobs, chopped onions for dinner, picked up the mail, Savchenko and Massot made this. Kind of makes you feel proud to be a human. 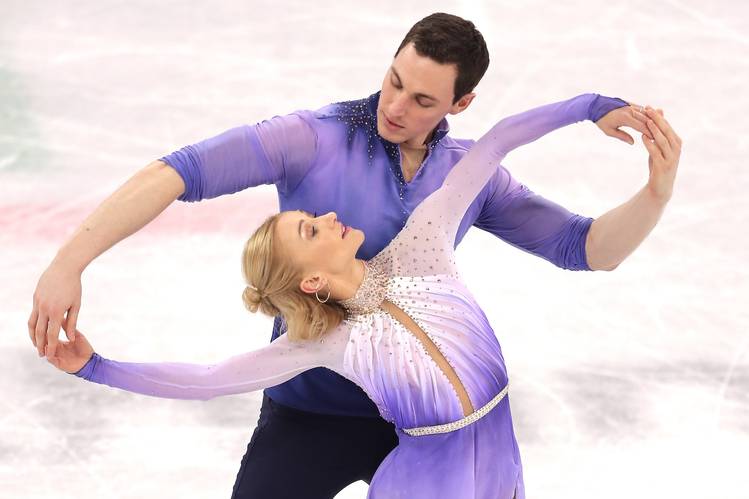 What else? The U.S. women’s hockey team defeated Canada 3-2 in an overtime shootout after a 20-years without a gold medal. Watch the shootout here.

Shaun White (USA) competed in his fourth Olympics and won his third halfpipe gold medal to become the most successful Olympic snowboarder of all time. This was medal #100 for the USA in these games. Watch his epic run to the finish line.

Here’s a name you should know: Ester Ledecka (Czech Republic), the first woman in Olympic history to win gold medals in two different sportsin the same year. She came out of nowhere to take the gold in the women’s Alpine skiing super-G, and for a few days I couldn’t really find Ester Ledecka on the internet.

All googling re-directed me to videos of skier Mikaela Shiffrin (USA): Mikaela lifting weights, in her in her home, skiing gates, footage of her parents… No Ester anywhere. But then Ester won another gold medal, in snowboarding, and suddenly the girl’s got a wikipedia page, glamour shots, you name it. It took two Olympic golds for this chic to prove to the world that she is a big deal. Fun fact: For some reason Ester was missing her skis on race day and won on a pair borrowed from Mikaela. Weird. Team USA’s gold in the Women’s Freestyle relay is the first ever U.S. medal in women’s nordic skiing and the first medal for men or women since Bill Koch won silver in 1976.  If you look closely as Jess Diggins rounds the final corner into the stadium to pass the skiers from Sweden and Norway she grows slightly larger, and her muscles become more pronounced under her clothing, like the incredible hulk. The announcer is amazing; he actually predicts this win twice during the race – I have no idea why, but he’s with them, every stroke, and absolutely loses his mind at the finish line. Watch the photo finish here.

There’s a lot to be taken away from an Olympics like these. Everyone of these athletes has had setbacks – injuries, losses. We can find lots of inspiration on how to show up, fail well, try again… but for me, these 2018 Winter Games have been about something else. It’s nice to know, on your average Tuesday night, that all these badasses are out there, playing their hearts out, giving the rest of us something to cheer for. Olympics like these show us who the heroes are.