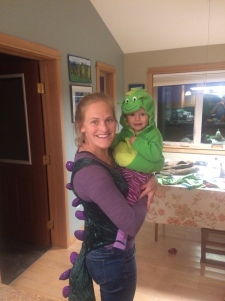 Happy Halloween y’all! You didn’t see us at any parties this weekend because we don’t go out anymore, and worse – we rarely invite others in. The house is a mess. We eat dinner by five. A’s dinner mostly lands on the floor to get licked up by the dog, and whatever he doesn’t eat mostly stays on the floor. Welcome to life with a one-year-old.

Even if we have company, I have nothing to say because I don’t do anything other than walk to the park. “Baby A tried the big swing today,” just isn’t very interesting to most people.

I had no idea what it would be like to have a one-year-old, namely because parents don’t take them out into normal society where I might have seen them. People with one-year-olds have to be home at eleven for nap, four to prepare dinner, and bedtime is at seven. So I’m always available, but I’m not sure when we can hang out.

I’m avoiding you, but it’s nothing personal. I just don’t have any sane events to invite you to.

A walk used to be nice. But if we are outside she will have removed her hat, socks, and shoes again, and you will say, “Don’t you worry that she might be cold?”

You have to say these things for the same reason I must dress my baby warmly in the first place: We are good people, and the well-being of a child is at stake.

I can’t get said clothing items to stay on. I’d love for you to try. While you take care of my kid, I’ll sit, drink coffee, and think through one sane thought from beginning to end.

You probably could do a better job than me right now. You’re not worn down. You don’t have mac’n’cheese on your shirt. You probably slept well last night. You haven’t been doing this for 18 months only to arrive at this point knowing you’re not even half done and you can never look back because the only way through is forward.

Baby A is also a climber and always has scabs on her forehead from the most recent face digger. She likes to get a new one just as the others are almost healed so as to keep them in constant rotation.

Her climbing can be dangerous but she’s actually good enough now that I stopped worrying about it. Falls really are very rare in comparison with how often she climbs. So I let it happen. If I tried to control her at this level I would never have a moment of peace.

Needless to say, she does not stay in her stroller for an entire one-hour walk. She starts safely seated and buckled inside, but before we get back to the house she will have been on the top (forward and backward), inside standing while I clutch at her clothing, on my shoulders, and behind the cart pushing.

To finish off, she will refuse to walk or ride, and I will pick her up and clip her back behind the buckles as she screams and thrashes. You will inevitably ask – “Can I help?”

I’d love to walk with you, but it’s embarrassing and not conducive to chatting. What all of this amounts to, is I prefer to be alone with my child. Life is coo-coo enough without having to explain everything to another person.

At least I have M. After a particularly difficult bedtime, my sleuthy husband asks, was it the long nap today?

In the evening, baby A goes to bed early but wakes up every 25 to 45 minutes, so there’s barely enough time to watch a sitcom. The other night, M tended to her first wake up. She drops back into frog pose as he enters the bedroom so he can rub her back, a habit the two of them have formed. “Where is your diaper?” he asks, puzzled. Half-asleep, she whips out the diaper from beneath her body and shows it to him. She has taken it off and re-zipped her pajamas.

So you see, it’s very entertaining around here. Instead of thinking of ourselves as social rejects, I’d like to think that those of us with one year-old babies belong to a secret society. We eat with our hands and sniff diaper bums. We should have a secret handshake.

4 thoughts on “Secret society of one-year-olds”