My daughter is a little corvid. She shows off (Leo her rising sign). She persists with puzzles (This buckle is mine!) She is social and quick to make friends. As of this week she can scale her crib, open the bedroom door, and toddle out to her slack-jawed mother when she’s supposed to be napping. 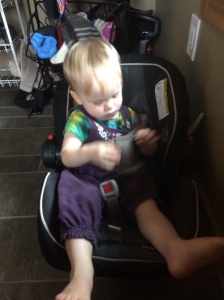 Today our precocious toddler turns 1.5. My husband and I counted up 25 things baby A can say or sign. The volume of language she has picked up surprised us almost as much as realizing that she’s already outgrown the shoes that were too big in August.

In the morning, when baby A wakes up and head-butts me in the face, it is still dark but the first word out of her mouth (so I thought) is “outside,” meaning she’s ready to go. This was cute, and fulfilling of my Nature Baby fantasy, until I realized she is saying “other side,” meaning my left breast is out of milk and she wants to switch to the right.

I want nature to be so built into her understanding of the world that she won’t remember learning about it. For this reason, and because things get coo-coo if we’re in the house too long, we are outside twice each day.

Since my generation still needs a ‘good job!’ for completing basic bodily functions, I’ve tried to avoid giving our daughter a lot of positive reinforcement. I like to think my smile and shining eyes are enough for her, and that she’ll gain inner metrics by which to measure her merit, rather than looking to others for an atta-boy. In case I’m wrong, she has her dad’s loving praise.

Which means baby A already gives me more positive reinforcement than I give her. This can’t be good.

I have held back from teaching baby A the standard animal sounds – ruff, meow, pin, tweet, moo – in favor beginning her education as an artist. I introduce her to real animals, and she makes up sounds for them.

While endless board books teach the virtues of the cow, few have anything to say about wild animals. Right now baby A considers every mammal from muskox to moose to be a dog – “Ta-do,” she says. Thankfully she just picked up on birds (ie. the chicken), which are decidedly not dogs.

I’ve started to teach her the corvids.

A murder of crows, gathered into a winter flock, patrols the beach. “Crow,” I say, snapping my hand under my chin like a beak.

She may not have a lot of words, but she makes such good use of her small arsenal that I’m beginning to think I could communicate in any language if only I knew how to say mama, dada, two, shoe, eye, apple sauce, and pizza.

We hear a raven beat its wings twice as it lands in an elderberry tree. “Caw!” it says. “Bird,” I say, snapping my hand under my chin like a beak. “Raven.”

Corvids are language learners too. If you hear something outside and you don’t know what it could be, chances are it’s a raven. Ravens mimic many sounds in the forest – from dripping water to a croaking toad. They also can be taught to repeat words.

Baby A insists on her own way of doing things. She’s just a as likely to make up language and teach me as I am to teach a word or sign to her. Now that she has a “word” for bird she may or may not pick up the sign, but I’ll keep trying.

Baby A also impresses me with moments of mimicry. Though I don’t quite give her credit for these, I have inconsistently heard her say ‘bean,’ ‘diaper,’ ‘stick,’ baby,’ and ‘tomato.’

We watch as magpies fly like gliders over a meadow. Their wings come to their sides and they dip and flare out and they glide. Dip, glide dip, glide dip all the way down to the ground. These birds are new arrivals that migrate down river corridors from interior Alaska in late September to over-winter with us on the coast.

In the evening we talk about the birds we saw. “Da-doe!” She says, pointing outside. “Bird,” I say, snapping my hand under my chin like a beak.

“Da-doe!” She agrees. Then, placing the back of her hand on her forehead, she wiggles her fingers.

One thought on “Little corvid”