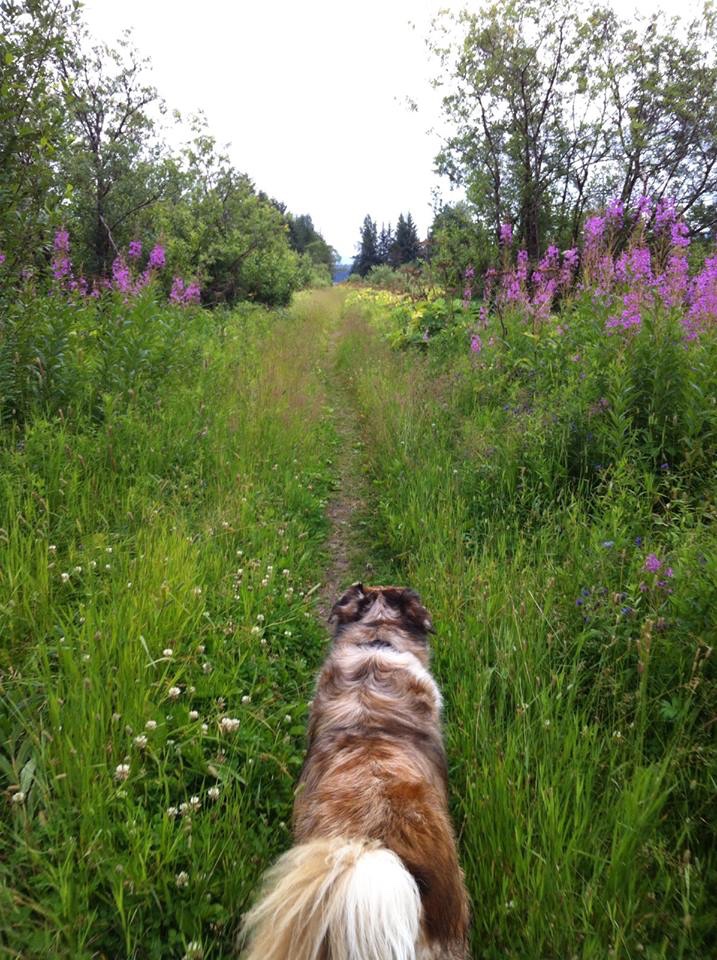 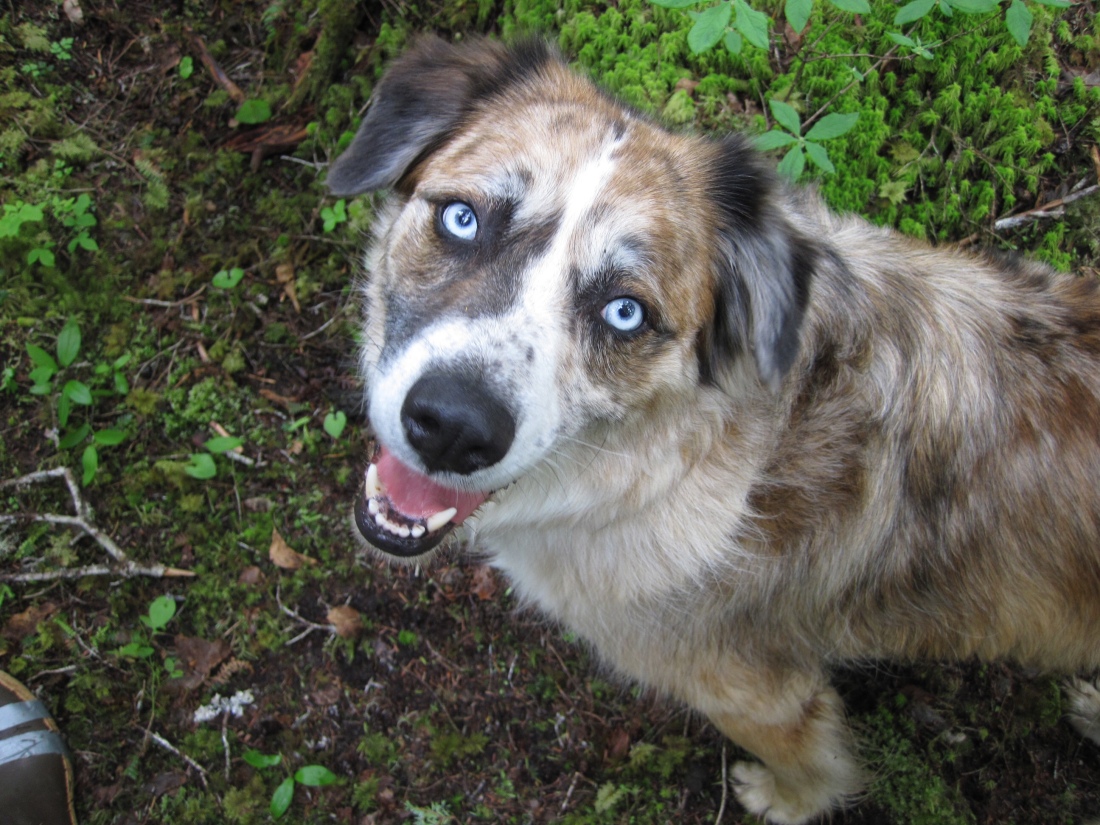 “Does he look like a Talus? My sister and I stood outside of a wire cage at the Anchorage Humane Society wearing ski bibs and beacons. It was supposed to be a quick stop on our way home from the mountain; but there were puppies.

I had decided on this name years before my dog and I ever met. The mottled red-browns of his fur and sky blue eyes made me sure he was the one.  An aunt who has opinions about these things met us at the pound and ran him through a battery of puppy tests. Did he nip at a hand in his kibble bowl? No, he didn’t. Did he startle at the jingle of her keys? Of course not. 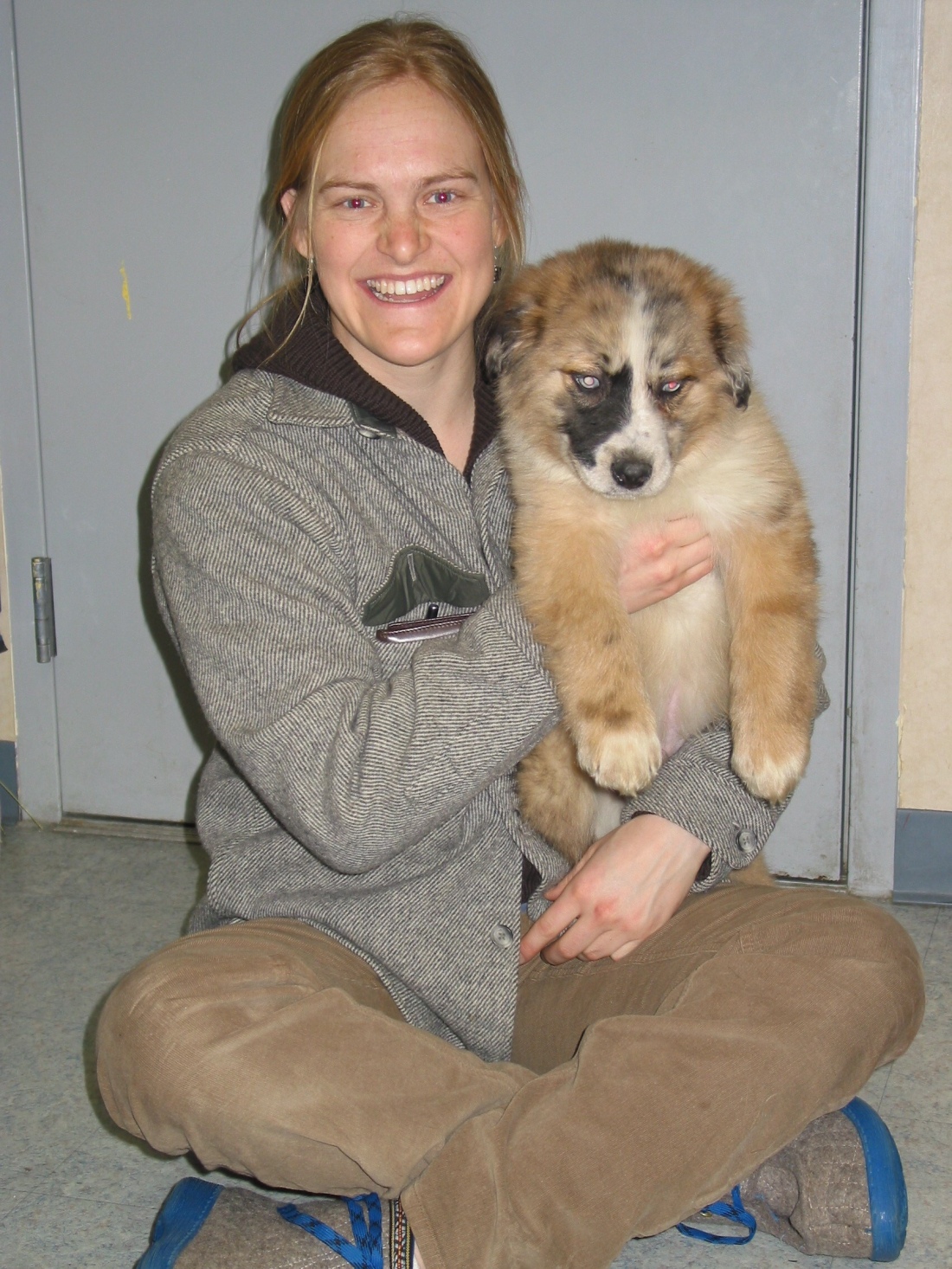 Eventually, crows’ feet develop around my eyes, and the black fur around his eye fades to gray. My husband appears – and then our daughter and sons. I waited so long; but in retrospect it took no time at all to create this family. 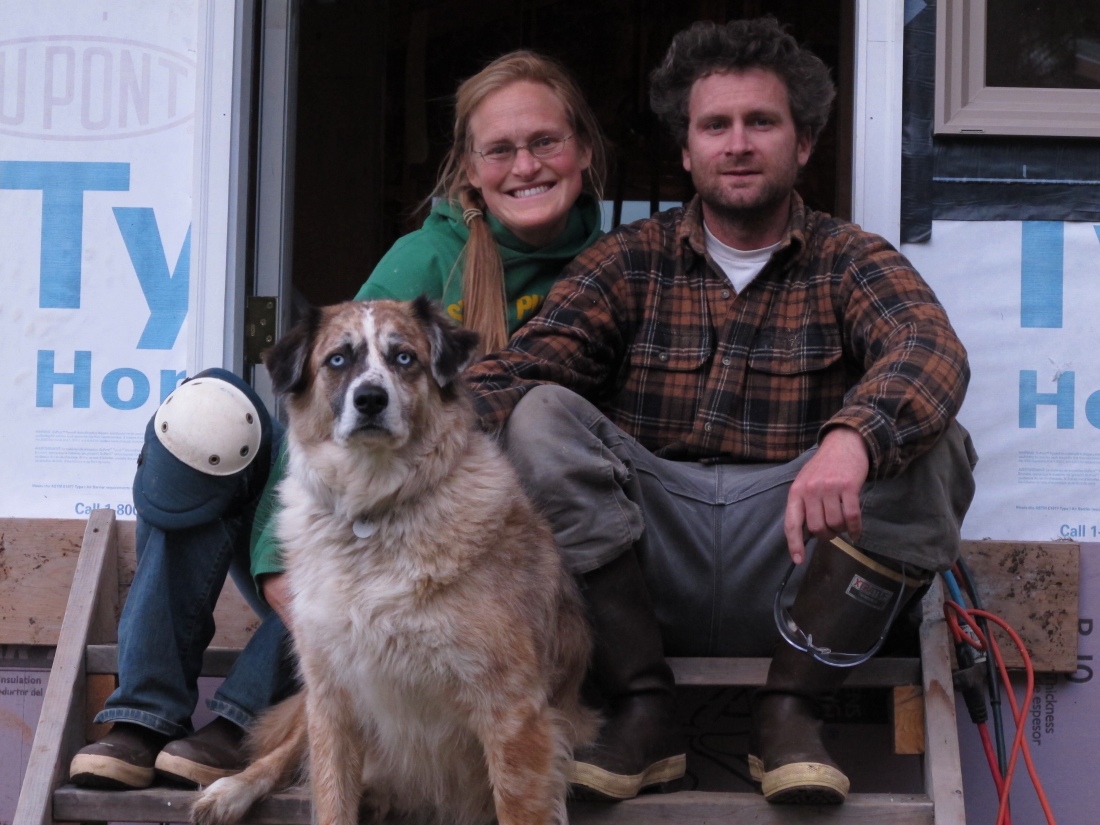 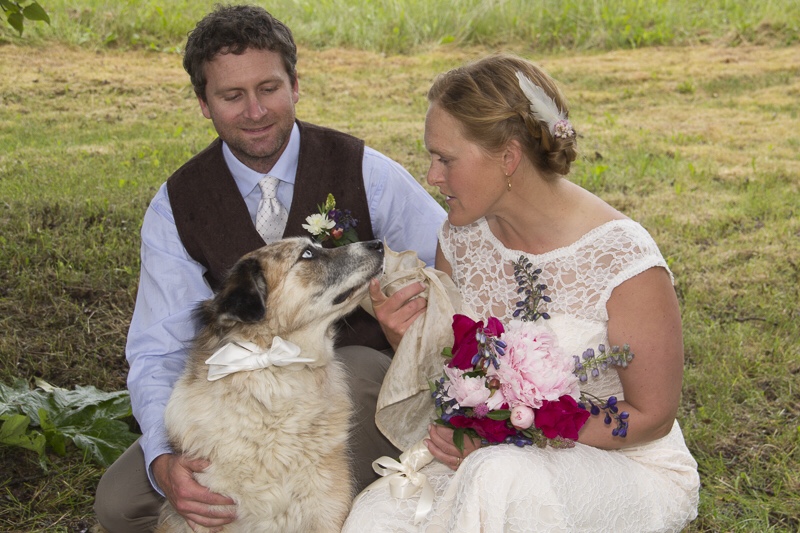 Avery booted Talus from center stage but he photobombed the fifty pictures I have of her first steps. She will remember him, I think. The brothers technically spent a year-and-half living under the same roof as Talus but weren’t often in shared spaces. With three little kids, my aged dog was often left to lie alone under the carport. Some days, our interactions were limited to the moments when I lovingly placed a bowl of kibble before him.

It’s not news that a once beloved pet can be forgotten when babies arrive; I just didn’t think it would happen to me. 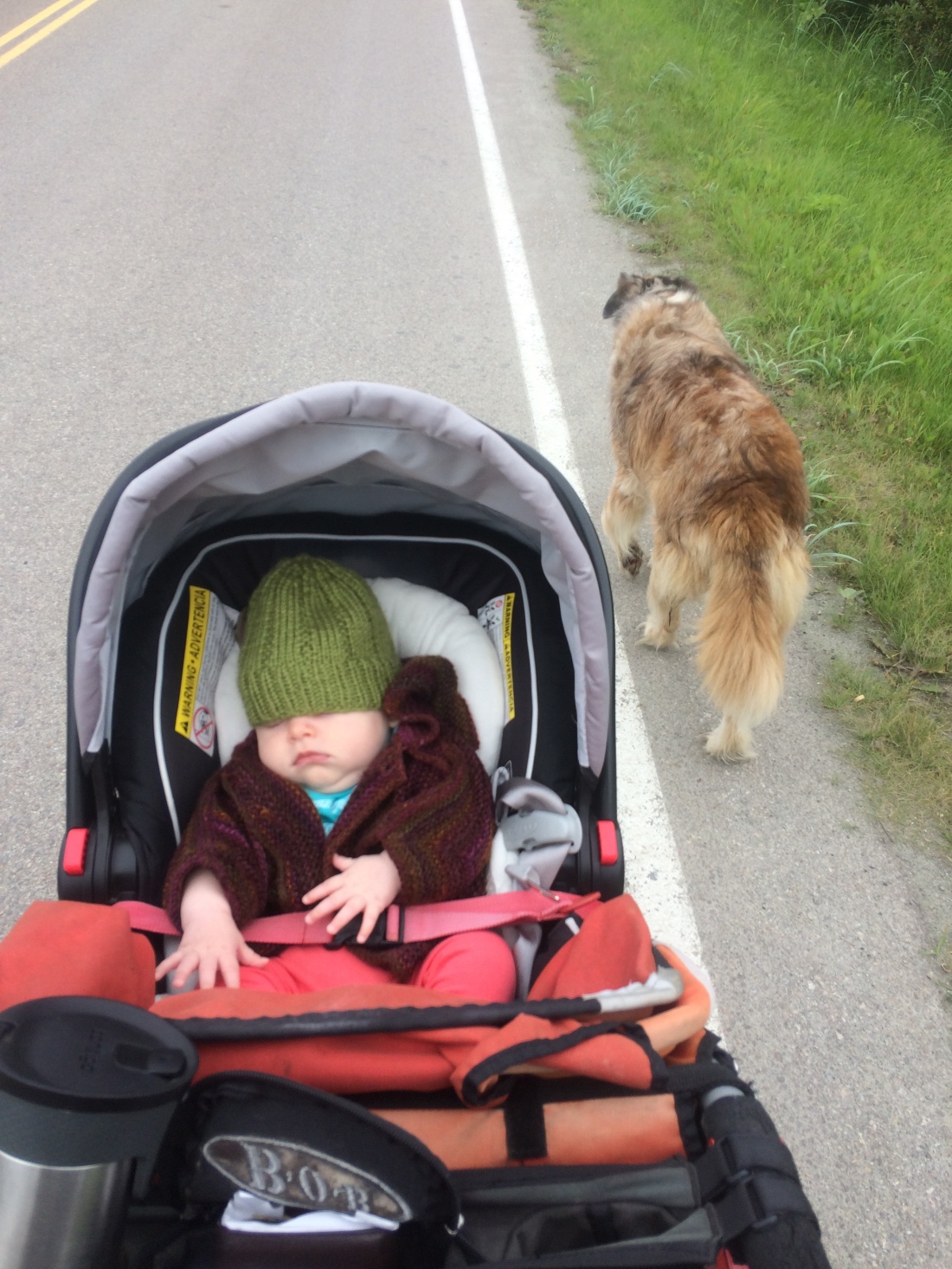 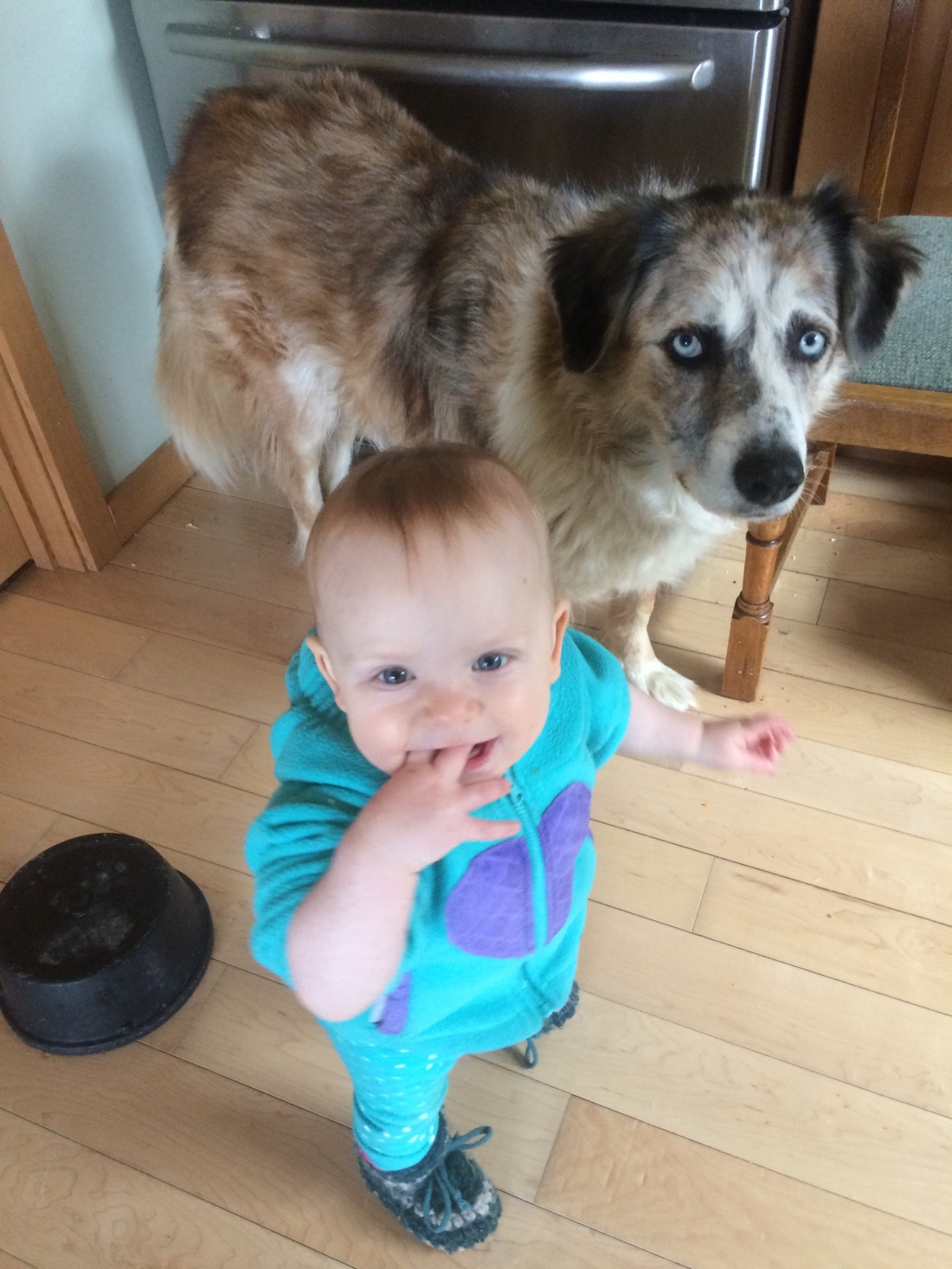 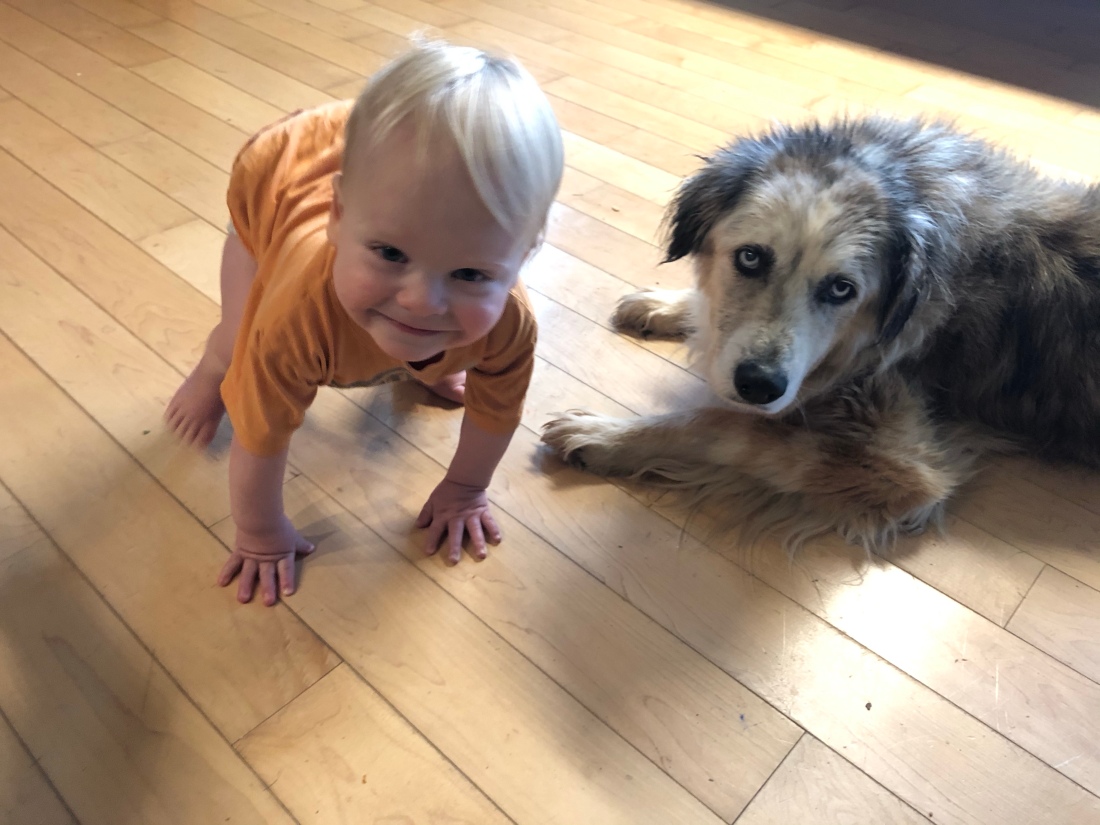 On his last day of life, Talus is gentle with me about  the ways that I failed him in the end. All I feel from him is deep love.  You did what you had to do, he says. I try to send it back, but he refuses. Today, he said, is about my love for you.

Euthanasia is a difficult decision. His body is weak; but his spirit is strong. I sit with his head cradled in my lap waiting for the vet to give her injections. I ask my body one more time, just to be sure:  Is this OK? Is it time ?

The answer comes from Talus : I don’t mind, he says. I only want to be together. 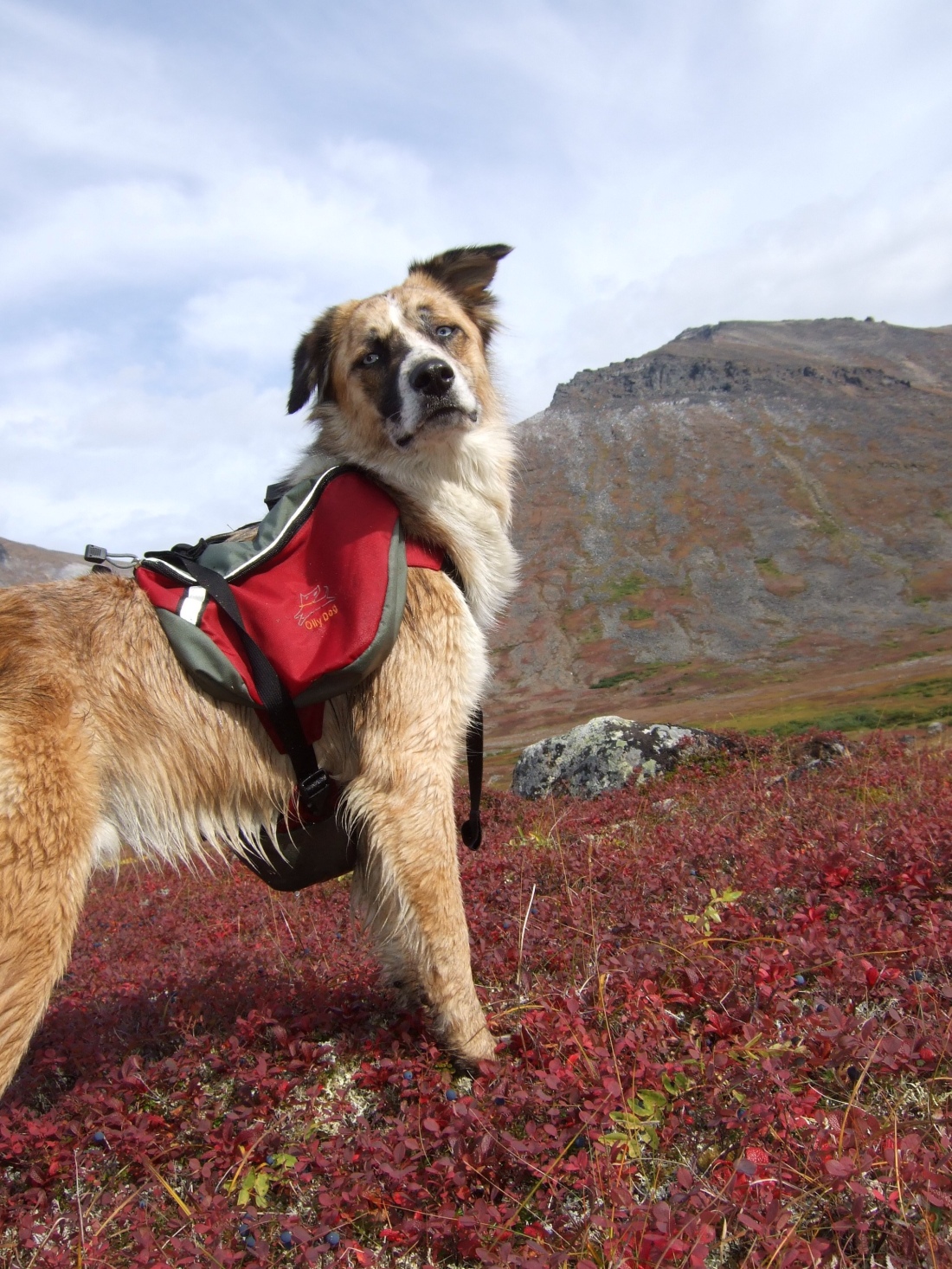 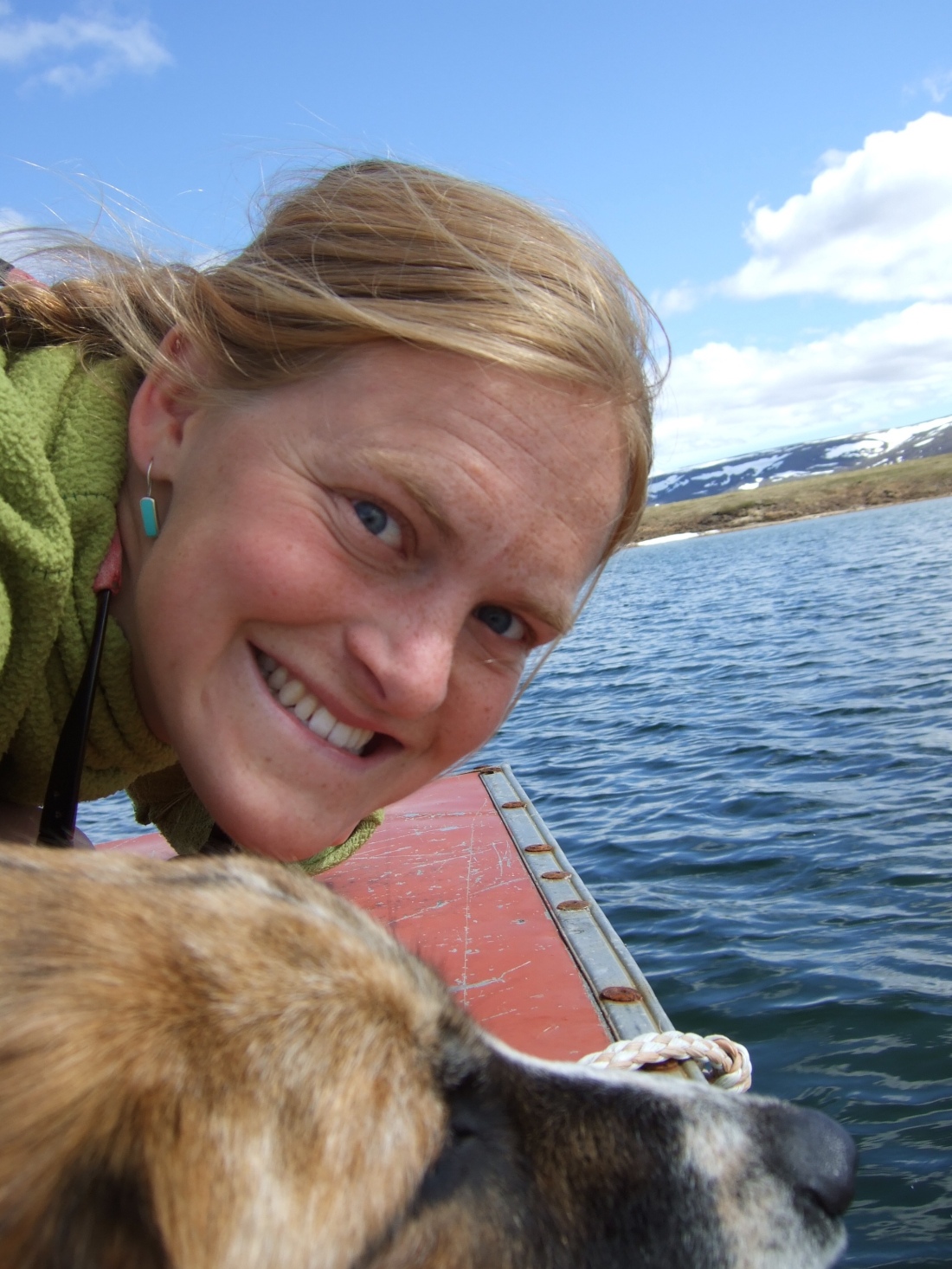 Death takes a long while so my husband and I tell stories to pass the time.  I talk about our time in the sub-Arctic where Talus and I divided the long season into “winter A” and “winter B” and cross-country skied every day. Talus learned to swim up there when I waded across a river to check on a smolt trap and he couldn’t bare for us to be apart. The only wrong thing he ever did was roll in a dead walrus.

M reminds me that Talus rarely went anywhere with him in our first years together unless I was along for the ride. In our family, everyone wants to be with mama. Gulla Gulla, my children call it.  Together. Talus was first to feel this way about me; but I had forgotten. 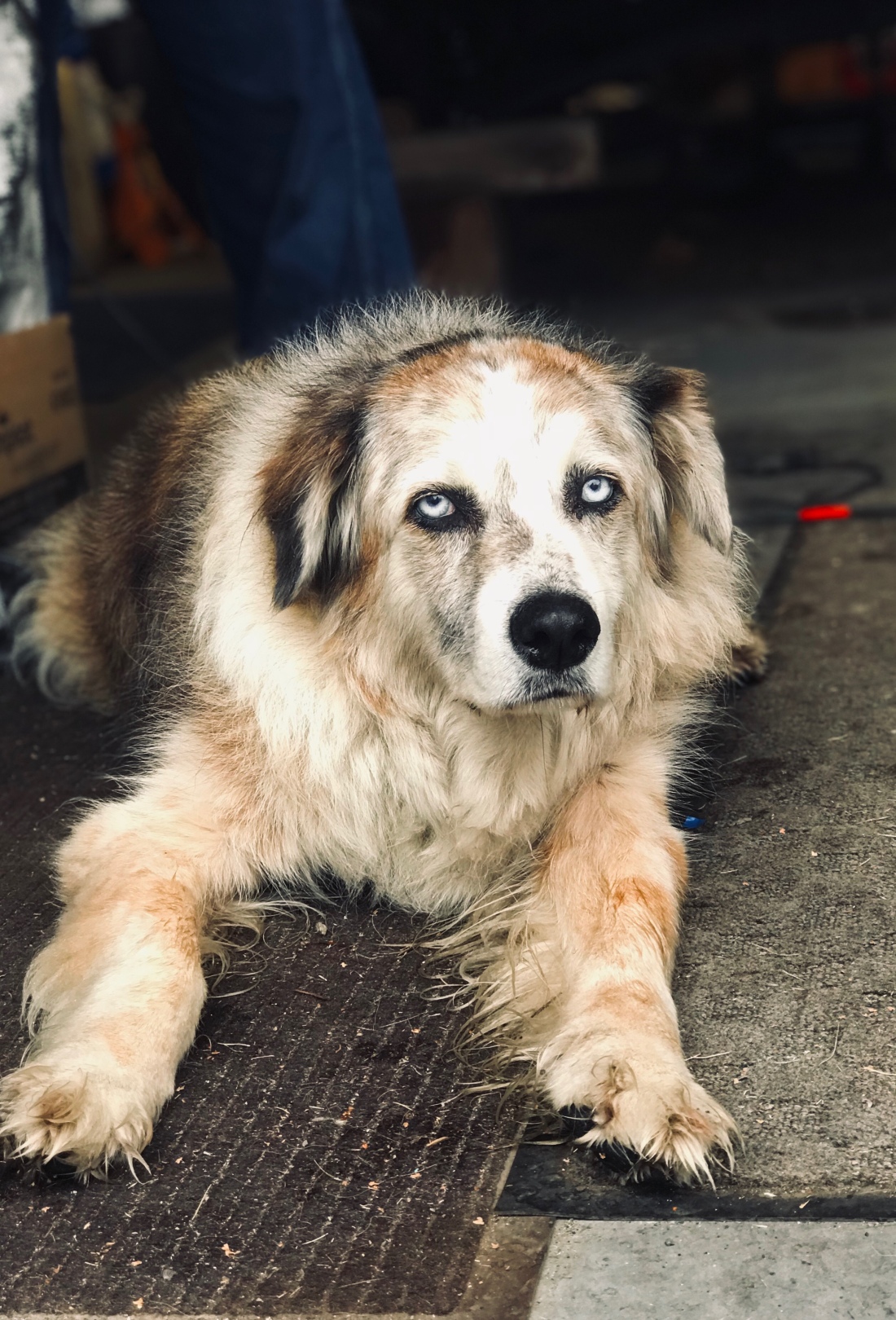 I throw it far.

Go! I say . It’s time! He runs after the stick but brings it back with a smile on his face.

Go after it! I say, and throw it again. Again, he brings it back.

Talus asks, in the language of pictures, if perhaps his spirit could join with mine so we might live out the rest of our days as one?

Of course, I say. 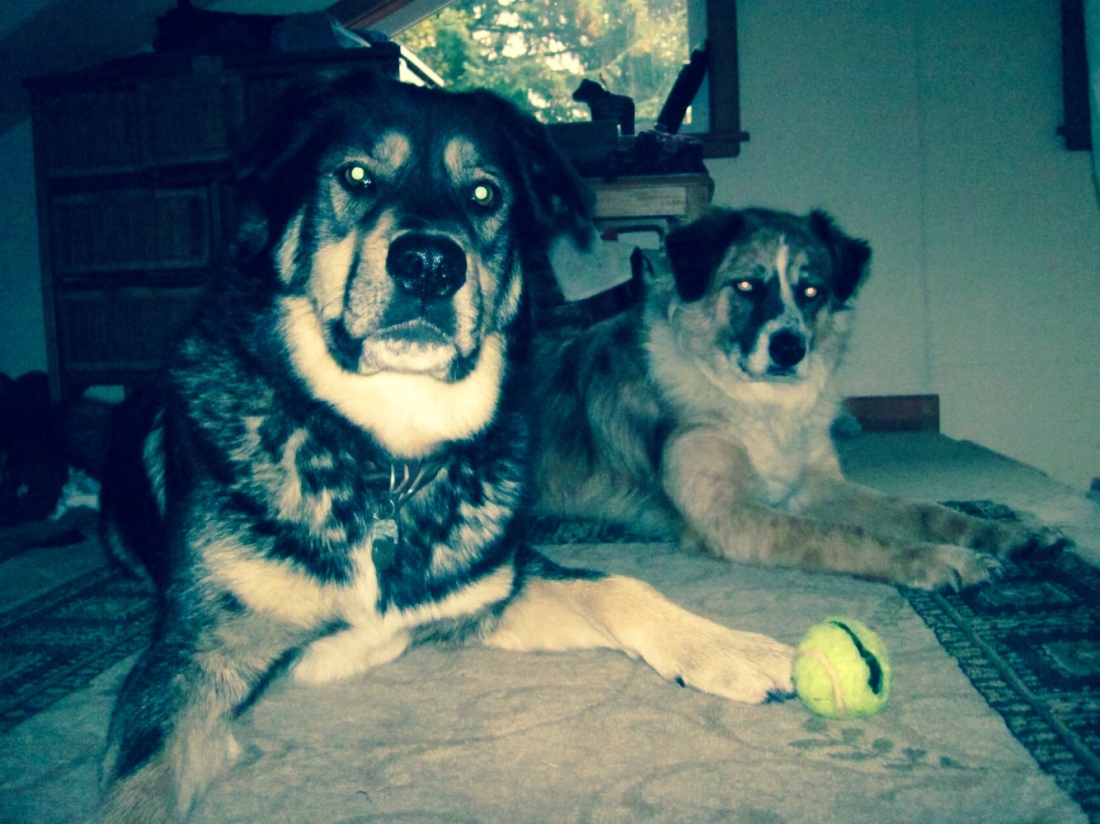 He sends one last image from a winter when we cared for his two best friends. Max and Zak.  Those dogs have been gone for years. The three dogs lie on their respective beds, under a covered porch, looking very pleased with themselves.

Finally, life flows out of Talus and up my arms like one river flowing into another at their confluence. Our spirits mix and he vanishes. M carries his body into a bedroom and lays Talus under a string of prayer flags.

I never understood how much courage my dog gave me by virtue of his company. Now, surrounded by all of my people, I feel lonely, untethered, and vulnerable. A deeper sort of love resides within me that wants to be given. It will be hard to learn to let people love me like my dog loved me.

That night, lying awake in my bed, thoughts cycle through my mind like leaves stuck in a revolving door. Was it the right thing to do? Was it the right time? It’s hard to come to any conclusion other than this: What’s done is done. I sift through and deliberately repeat the thoughts that serve me. I trust in the moment when the decision was made.

I’ve been talking with my daughter about what to do with difficult emotions. Grief, I tell her, is something we are meant to pass through and out of. Tears spring from a well and it’s best to cry like you’re looking for the bottom of it.

With my eyes closed, I feel Talus’ spirit. I feel the softness of his toes, his crimpy ear fur, the wag of his sail tail, and the steady rise and fall of his breathing.  I feel his love from the inside. He is not so far away. 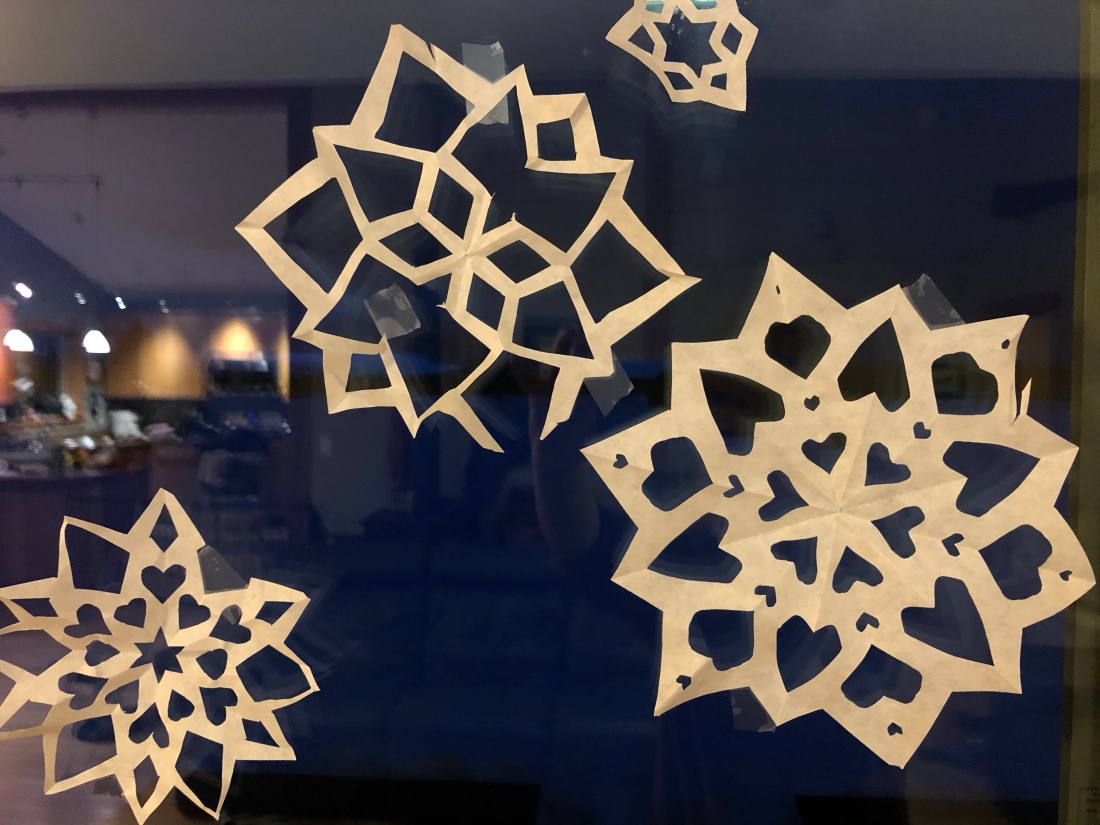 In the morning, Avery and I make paper snowflakes  to hang on the windows. Sadness inspires making of ephemeral art in me; something to cheer myself up in the moment and mark the passing of time as I heal.  Once I made paper birds that stayed on the windows for years, but I will take these down when the snow melts. It is well with my soul. 

After a few days of our family holding each other in random moments, I get out for an afternoon ski across the meadow. To my delight, the strong spirit of my pup is there, bounding through the snow beside me. We head out into the day, together again. 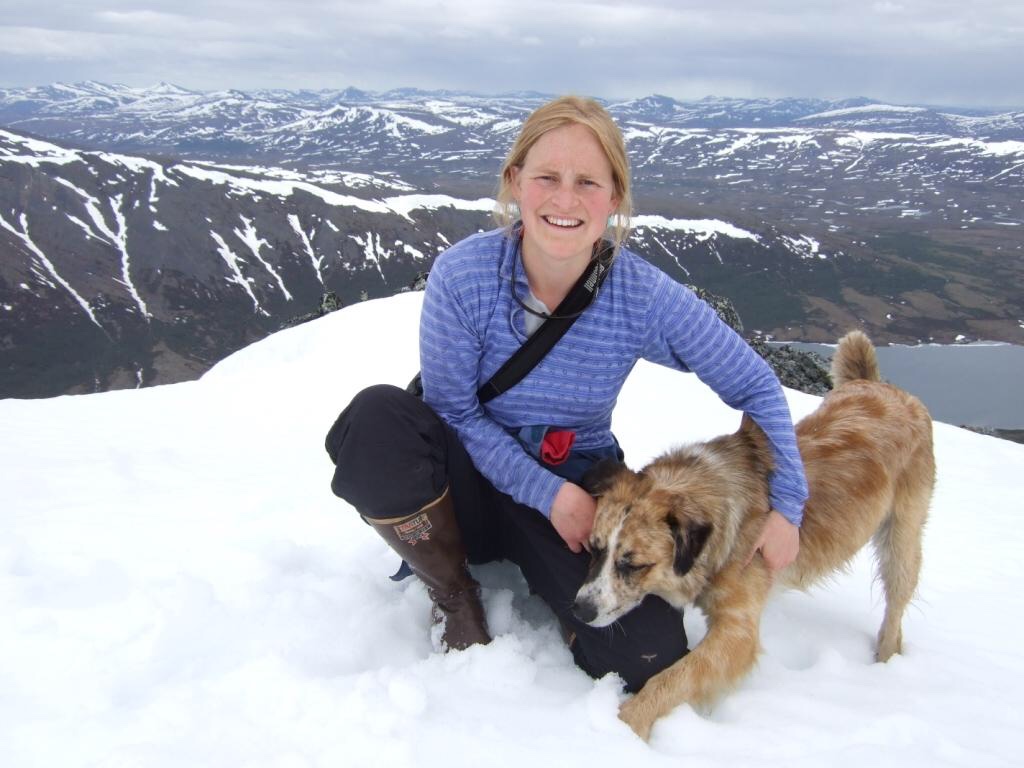